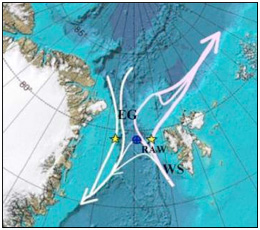 Project Details
The objective of this project was to develop an Environmental Assessment Report (EAR) for the Nansen Environmental and Remote Sensing Center (NERSC), Bergen, Norway, in support of an acoustic tomography experiment in the Fram Strait. Tomography uses low-frequency underwater sound to monitor heat flux and currents to better understand the effects of climate variability on water-mass transport and sea-ice exchange. This project was sponsored by the European Union (EU) and required an EAR to consider whether the experiment may cause any impact to marine mammals. In collaboration with NERSC scientists, MAI developed the first EU EAR to address the effects of underwater noise on marine life. As a leader in environmental compliance related to U.S. regulations, MAI was able to transfer its wealth of knowledge to international regulations. MAI prepared a detailed assessment of the potential direct physical effects and indirect masking effects of the proposed acoustic transmissions on marine mammals, fishes, and marine protected areas. The EAR underwent independent, objective, peer review by subject matter experts selected by the EU. The conclusions of the EAR were that the experiment had negligible potential for impacts to the environment and that no ethical issues were reasonably foreseeable, as the experiment had no potential for causing grave danger to marine mammals potentially occurring in the Fram Strait area, and concluded that the experiment be allowed to proceed as planned.

Final EAR for the ACOBAR Acoustic Tomography Experiment in Fram Strait
In May 2013, Marine Acoustics, Inc. completed the second Environmental Assessment Report (EAR) for underwater active research sound sources that required European Union (EU) approval. The first EAR, finished in December 2009, predicted the potential effects of the proposed research by the Nansen Environmental and Remote Sensing Center (NERSC) in Bergen, Norway, which conducted the research in the Fram Strait in 2011-2012. In January 2010, the European Commission’s Research Directorate-General accepted the first EAR for the EU. The second EAR documented the actual research activities and summarized the potential for any environmental effects.

Discovery of Sound in the Sea (DOSITS)

This project is being conducted in cooperation with the University of South Florida and is sponsored by the...

The objective of this project is to develop a software-based tool that provides environmental planners, env...

MAI has been cooperating with Rite Solutions, Inc. to combine the Acoustic Integration Model © (AIM) with t...

Effects of Industry Sounds on Marine ...

Dr. Ellison has been a key advisor to the JIP’s (Joint Industry Programme) New Research Programme on the Ef...

This long-term effort entails the comprehensive environmental compliance support for the testing, training ...

MAI supports the Submarine Combat System Program Office (PMS 425) in the development of the Tactical Contro...

The objective of this project is to develop tactics and training guides for SH-2G(E) SeaSprite helicopters ...